Building on the unprecedented success of last year’s awards (well, they were the first) I wanted to come up with the 2018 version. It shouldn’t be difficult as, according to the new “digital wellbeing” app, I use my phone over 5 hours a day, so I must be doing something on it. So here goes, the apps I liked best in 2018:

Best social app in a bad year for social apps: Slack. 2018 is the year I removed all social media apps from my phone. Twitter was the last to go, deleted on the final day of the latest Supreme Court judge confirmation hearings. The rest were gone long before that. It wasn’t just the privacy issues, they just weren’t doing anything for my wellbeing. Where I found solace this year was in closed, invite-only communities. Some were small, limited to 20 or so people, and some were much larger, a few thousands. Most are run on Slack. Communities can be fickle, but Slack, with its interest based channels, its smaller, private groups within communities, and simple direct messaging, just works. Slack’s only drawback is that as it’s adopted by more communities, the more Slack groups I end up belonging to, and it becomes more difficult to navigate between them, and not miss important updates. Hopefully, Slack will address this with smoother transitions and more manageable notifications in the upcoming year.

Best news app to fill the gap: New York Times. This isn’t really a fair category, as a news app is mostly judged by its journalistic content and not by its features. Yet, after removing Twitter, I needed a source of news on my phone and the New York Times is my favorite (I’m a paying subscriber.) It does a good job with updates, downloading content for offline reading, and having the right categories. What it doesn’t have (but used to, which makes it all the more frustrating) is a night mode, where the background is black, and text is white. Come on, Times, even Twitter has that.

Best at reducing anxiety: Waze. Navigation is one of the most used phone apps and this year Waze took the lead. Its focus on getting me from one point to another in the shortest possible time makes driving in the Bay Area less stressful. Even when I know how to get to my destination, using Waze allows me to not check traffic and reduces anxiety. My ETA is front and center on the app, and it’s usually pretty accurate.

Waze’s selection as best navigation app comes with the downfall of Google Maps, which became truly unusable this year with its overwhelming and unnecessary abundance of bottom sheets, sliding up over the map content I need to see. No, I don’t want to Explore my location every day, I live here, and work there, so there’s no need. Ironically, it has become a difficult app to use for many of the use cases the new features were built to address, like looking for, say, a good pizza place off the next exit. 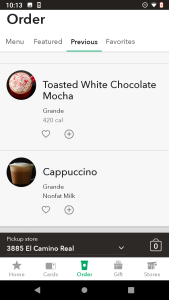 Easy to reorder, with the nearest store already cued up. Best perk: skipping the line at the store.

Most worthy of a spot on my phone: retail apps. There are a slew of apps that, backed up with efficient store operations (this is essential) make my day easier and save me time. The ones I like are mostly for fast food outlets that allow me to peruse the entire menu, place my order with all my idiosyncrasies, and allow me to pick it up at the nearest location without a line. They also remember my frequent orders and whatever loyalty prizes I’ve earned. If it were up to me, that’s all they’d do: just be efficient and save me time. Yet some insist on sending me unnecessary notifications or asking for access to my contacts for unconvincing reasons. I have found Starbucks’ app and store operations one of the better examples of this app-operations partnership. Carry on.

Most over-reliance on AI: Spotify. Loyal readers may recall that last year I was delighted by Spotify’s use of machine learning to create better playlists of songs I liked. This year I’m frustrated by Spotify’s continuing insistence that users can’t be trusted to curate their own music. Spotify’s response when users want to block a song, artist, or playlist is to instruct them to listen to other songs and playlists so that The Algorithm will learn from that and improve recommendations. This year, that assumption fell apart for me on several occasions. In the most irritating case, my account was hacked. After regaining control of my account, there were new playlists in my very prominent “Heavy Rotation” section that I had never played. I’m not allowed to block or remove them so now my automatic Spotify playlists (daily recs, heavy rotation, my year in review) are full of Colombian dance music. I’m not a big fan and am frustrated that Spotify’s solution is to “just listen more to the music you like, the algorithm will adjust.” This takes too long and, in the meantime, I might accidentally hit one of those playlists, further reinforcing Spotify’s algorithmic assumptions. It’s time to let users have control when the algorithm gets it wrong and just allow them to delete or block a playlist, artist, or even just one song. Other examples are when a guest wants to listen to an artist that you never want to hear again, or when a song/artist causes heartache where it formerly caused delight, like a couple’s song after a breakup. Sometimes, manual, human intervention is best.

Still getting the job done and still meh: email apps. On some days I wish these apps were better at sorting out the wheat from the chaff, but on others I see the damage that algorithmic selection has done to newsfeeds and playlists and relent. Gmail is the best at sorting email, and usually gets it right. It also lets users define filters and rules for when it doesn’t. It’s the best combination of automation with manual adjustment for email. Other apps are not as good at automatic sorting, with some even giving prominence to emails that phish their own service. I’d love to see more customizations that allow users to achieve inbox zero with smarter automation, and also more flexible vacation auto-responders.

It was a strange year for me on mobile. One one hand, I used a greater number of apps, with a wider range of functionalities. Yet on the other, I spent less time on my phone, especially in apps with newsfeeds. My phone was mostly a way to get stuff done more efficiently and to communicate. For me, this year was less about entertainment and more about utility and it’s an interesting usage shift that I didn’t anticipate. Let’s see what 2019 brings.

This site uses Akismet to reduce spam. Learn how your comment data is processed.